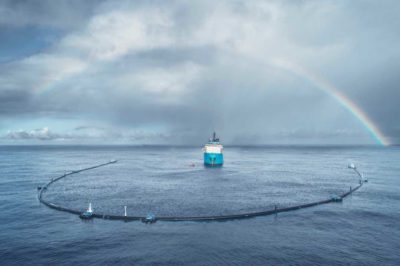 SAN FRANCISCO – The people behind a Dutch nonprofit focused on cleaning plastic pollution from the world’s oceans are nothing if not resilient. Two months after the launch of their massive trash-collecting device to the middle of the Pacific Ocean, they’re revamping the design they’ve worked on for years after it turned out to have some problems.

« The journey toward a clean ocean is certainly not an easy one, » said the Ocean Cleanup’s Chief Operations Officer Lonneke Holierhoek from her office in Rotterdam.

In a post on its blog late last month, the Ocean Cleanup’s CEO Boyan Slat wrote that the device deployed in the Great Pacific Garbage Patch to much fanfare in October was having trouble holding on to the plastic pollution it was created to corral.

To help fix the problem, the primary vessel that oversees the project is expected to arrive in San Francisco Friday or Saturday to take on a new crew and resupply, including special equipment to help modify the device, dubbed System 001.

« Depending on when all our gear arrives, it will probably depart on Tuesday, » said Holierhoek.

Millions of tons of small and large pieces of plastic are constantly being washed into the world’s oceans, where they tend to collect in specific areas determined by currents and weather. These slow-moving whirlpools create vast areas of water infested with plastic pollution that hangs in the water like fog, harming marine life and leaching chemicals into the sea.

More: The Ocean Cleanup system is heading to the Great Pacific Garbage Patch

More: 6 things you can do to stop plastic pollution today

More: Where did the trash in the Great Pacific Garbage Patch come from? How do we stop it?